How Certainty Will Kill Your Business

We generally think of being certain of our ourselves and our beliefs as a positive thing…but what if it’s not?

At one time, people were certain the world was flat…

…that no man could run a four-minute mile…

…and that man would never walk on the moon…

…until, of course, Christopher Columbus, Roger Bannister, and Neil Armstrong.

Once those game-changing events happened, it became perfectly clear that the world was spherical, men (and women) can run faster than anyone thought possible, and the moon (and beyond) was within human reach.

Certainty was replaced with a newfound clarity.

Certainty comes from a place of complacency. It means that you don’t challenge your assumptions, you don’t ask challenging questions, and you don’t test the merit of new ideas. You accept situations, thoughts, and ultimately limitations without question.

Clarity comes from a place of inquiry, not being satisfied with incomplete “truths,” pushing boundaries, and seeking for better things. It follows an inquisitive, semi-scientific method of executing, examining, and iterating the process, again and again.

The biggest enemy of clarity is certainty. That may seem counter-intuitive, but certainty is insidious because you may be completely and totally certain about something that’s simply not true.

The change in thoughts and beliefs may not happen overnight, but it will happen. 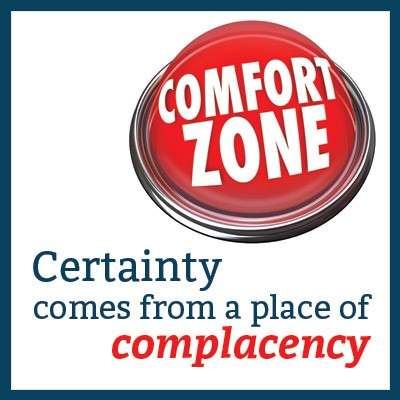 So what keeps us from achieving clarity?

Taking Out the Trash

Imagine, if you will, a river valley that is completely and totally polluted from years of chemicals and waste being dumped there. One day an agency steps in and forces the polluters to clean everything up. They have to get rid of all the chemicals and waste and stop dumping. Naturally, the valley will begin to heal. It will get cleaner and cleaner until it is finally pristine and beautiful again.

That’s exactly how our minds work.

Once we stop polluting our brains and feeding them bad or ineffective information, we start to get really clear on what we want for our lives. The brain’s natural state is that of clarity, and if we stop polluting it, it will heal itself and we’ll gain greater and greater clarity.

What stops us from getting clarity? Maybe drugs, alcohol, a dysfunctional relationship, or procrastination. Maybe naysayers or negative people. Maybe the media or television shows or music. It’s actually anything that gets in our way and makes us a little bit unclear.

A Pocketful of Posies

For example, in the mid-1800s, there was a worldwide belief that illnesses like cholera and plague were all caused by “miasmas,” or bad smells floating in the air. People would actually wear posies—the flowers—around their necks to block out the bad smells or the bad things in the air.

At this time, there was a big influx of people that were moving into the Soho area in London, which naturally increased the sewage. The government decided that since the area was close to the Thames River, they’d just run the raw sewage off into the river. Problem solved, right?

Wrong. A few weeks later, there was an outbreak of cholera that killed over 600 people in the area.

A local doctor who was always skeptical of this whole miasma theory traced the outbreak back to this sewage pump. He analyzed the water and convinced the local government to close the pump down, and the epidemic was halted.

How Certain Are You? 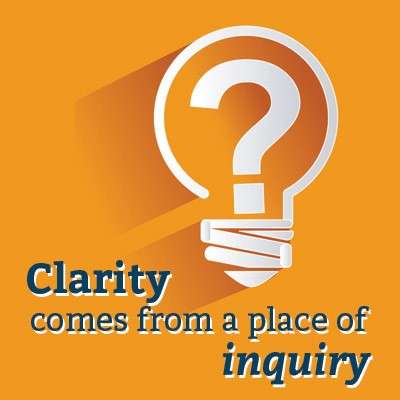 What enabled an entire culture NOT see that raw sewage might make people sick? It was a misunderstanding that was seen as fact. People were completely certain about something that was false, which led to further poor decisions, which led to terrible consequences.

If you’re certain about your “miasma understanding,” it can harm you more than you know. When you get clear on the truth and reality, it can really improve your life.

Incidentally, the research done on that London cholera outbreak actually led to the germ theory, which modern medicine still uses today, which has kept millions of people alive. Moving from certainly to clarity in public health has certainly been a positive thing!

Stop being so certain about why you’re getting those results and start asking better questions!

How do you ask more effective questions to get more clarity in your life?

Here are three techniques to help you…

The first technique is external verification, meaning to question your assumptions and verify your facts with a resource outside your own personal frame of reference.

Most of the time, we don’t even know that we’re making assumptions because of the projection bias, where we think that everybody else thinks exactly like we do, which leads to some really incorrect assumptions.

You can only be certain about your perspective of what has happened in the past, not about what will happen in the future, or what is happening right now.

Start with the facts, then externally verify them, and finally question your assumptions. 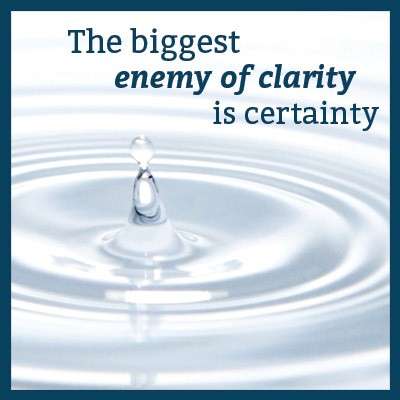 Because certainty is created only by telling, it usually leads to conflict from within or with other people.

Robert Burton tells a story about his father is his book, On Being Certain. His father owned a pharmacy, and once night in 1930, a man walked in with a knife and demanded that his father empty the cash register.

What the robber didn’t know was that Robert’s dad had a gun behind the register. His father took out the gun and aimed it at the robber. Instead of backing off, the robber came closer and held the knife to his dad’s throat.

He said, “I know you’re not going to shoot me, but I will kill you.”

What do you think Robert’s dad did?

He emptied the drawer and gave the man all the money. Robert’s dad had been certain that if anyone came to the store to rob him, he’d just shoot him. But in the heat of the real threat, he wasn’t certain anymore.

Be open to questioning what you would do or how you might handle a situation.

We like to believe and be certain of things. We tell ourselves what we would do, and we defend these certainties to others around us.

“If anyone touched my baby, I would kill him,” or whatever it might be. “If this happened, then I’d do that.” Of course, it’s noble and right to protect yourself and your family. But you must be careful because statements like these put you into a place of unclear thinking and box you into a place of conflict.

The point is that questioning versus telling in any situation allows for more possibilities instead of roadblocks.

This is also known as a misunderstanding of what’s real.

Again, these cognitive biases—these little errors in our thinking—can really impact how we make decisions.

These are usually very broad generalizations, but think back to the case of the miasmas. Imagine you’re back in 1800s London, and you hear a lecture from a scientist who says that disease and sickness aren’t caused by bad smells; they’re caused by these microscopic organisms called germs and bacteria.

Would you believe him?

Others might have shouted him down, saying things like, “Don’t be ridiculous. Everyone knows that disease is caused by bad smells. It’s obvious.” That’s projection bias in high gear. And if we pause to reflect, this is a reasonable assumption. After all, things that smell bad will generally make you sick, right?

To get more clarity, surrender to the idea that you may have been wrong, or you may now be wrong, and be okay with it. 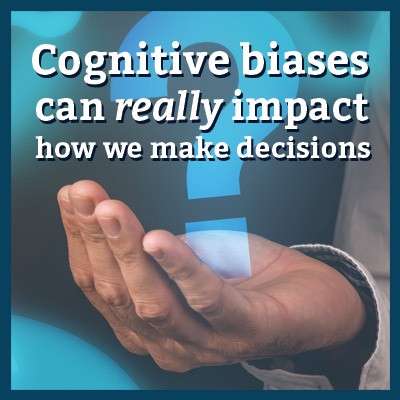 Here are three questions you can ask yourself to get more clarity:

1. What have you been certain of that’s kept you from getting clarity in your life?

What about money? Do you feel money is scarce or abundant?

Remember, this is a questioning process for you personally to get clarity. This isn’t just about telling. This is about questioning.

2. What are some things that have held you back because you know that you’re “right?”

Have you made any decisions that have led you to a place that you don’t want to be? What are some things that have held you back because you know that you’re right? What are they, and where do you want to be instead of where you are?

3. What are some things you might do to get more clarity in your life?

Clarity For Your Business 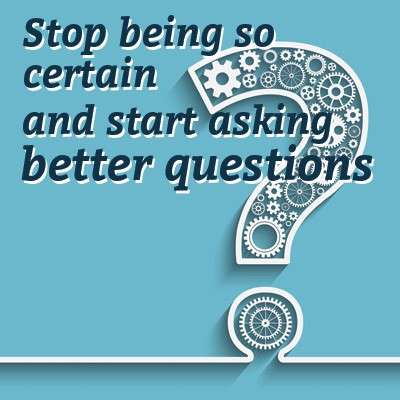 You might be perfectly certain that you are capable of hopping on a plane, flying to a new and exciting city, renting a car, getting a clean hotel, and enjoying a locally-recommended dining experience.

But, until you ask when am I departing, where am I going, how will I pay for the trip, who’s going with me, and what do I need to pack—just to get started—you’ll never begin to achieve the clarity required to execute your trip.

In short, it’s only wishful thinking without asking the right questions.

It’s the same in business.

You can be 100% certain of your future success … but until you ask yourself a series of proven, challenging questions, you will never attain the clarity required to create a concrete plan of action, much less reach your destination.

To avoid the common roadblocks entrepreneurs face, challenge false assumptions, overcome your biases, and effectively ask the questions that will get you unstuck and moving forward…

…sign up for our free daily newsletter right here.

It’s almost like having turn-by-turn navigation for your business. 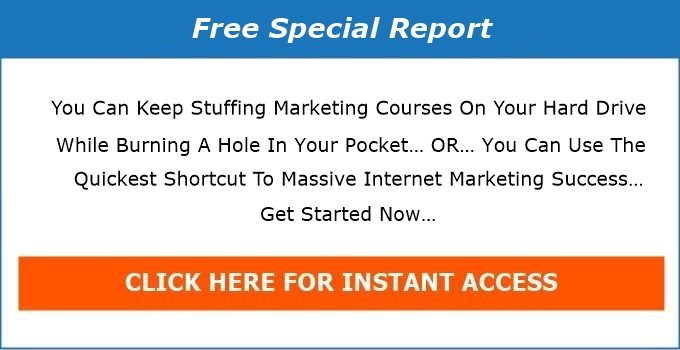