How to Deal with Conflict from Upline, Team Members, Friends and Family

One of the single most important skills you can learn is how to effectively resolve conflict.

I learned this at an exclusive mastermind, where I had the privilege of being surrounded by some of the world’s most elite entrepreneurs, including the “Rich Dad” himself, Keith Cunningham.

If you don’t know who Keith Cunningham is, he’s Robert Kiyosaki’s original mentor, and the source of a lot of the teachings within the bestselling book, Rich Dad Poor Dad.

Keith has a wealth of experience, having mentored thousands of entrepreneurs over many decades. 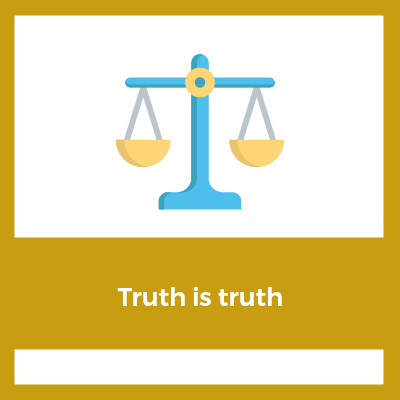 Importantly, this method works for all areas of your life, from issues with people in your business, to conflicts you may face with your upline, downline, crossline, friends, and even from family.

After all, truth is truth.

So in this post, I’m going to talk to you about some of the philosophies that Keith taught us and then I’m going to share with you just some additional thoughts and build upon those lessons.

Now, in the mastermind with Keith, we were each sharing what’s working and not working in our particular businesses.

And, without naming names, in this one family-owned business, the brothers who own it don’t see eye-to-eye on certain things, and when it comes to discussing those things, they clash.

“If you’re having conflict around a certain problem, it’s because the problem is too small. So as long as the problem stays small there’s no opportunity to work together.”

If you ELEVATE the conversation to what you’re actually trying to accomplish—what’s the bigger thing at hand that you’re trying to achieve—then there’s room for alignment.

And when you are aligned, then it makes it a lot easier to discuss potentially contentious topics, because you both focus on the bigger vision of where you’re going as opposed to just focusing on the ‘rightfulness’ or ‘wrongfulness’ of the particular tactic you’re discussing.

If you think bigger, that tactical conversation now has context, and there’s the opportunity to work together.”

As long as you keep the conflict at a small level, it’s pretty much going to be a “pissing contest.”

You want to elevate from tactics to an alignment of vision 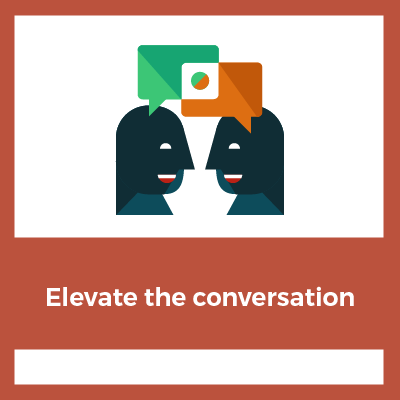 That’s the basic idea, because tactical conversations will always lead to conflict.

And what I mean by tactical is, for example, when you say something like:

…is it talking to friends and family?

…is it actively posting on Facebook to passively recruit?

…or is it running paid ads to attract people to you?”

Well, we can have arguments as to what’s the best way to generate leads all day long.

But what are you trying to achieve, ultimately? 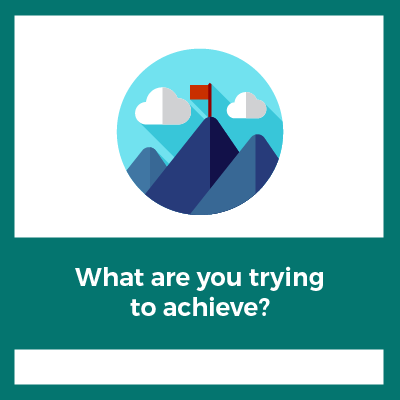 Is the big goal to create financial freedom and impact as many lives as possible?

Because if you say, “impact as many lives as possible,” there are many options to achieve this goal.

But, then again, so would cold market recruiting.

So when you put it in that context…

How could you possibly be right or wrong?

Does that make sense?

Because clearly, based on a stated vision of, “impact as many lives as possible,” obviously there are a LOT of tactics that could fall under that category.

So it’s not actually a conversation of, “this is the best way,” because as long as I’m accomplishing something that’s leading towards my vision, then there’s room for dialogue. 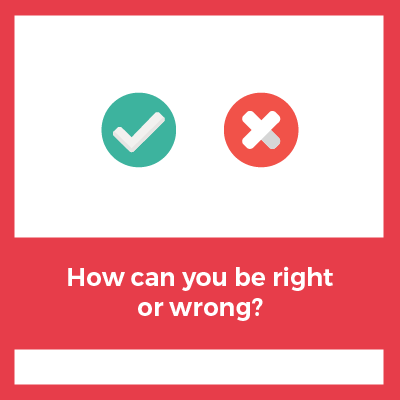 Your upline might be using different strategies, but ultimately, if you’re both bringing people to the business, what difference does it make?

So, you always want to ask yourself…

“What is the ultimate outcome?”

Whenever you’re in conflict, say…

“I’m going to ELEVATE this conversation even more.”

You might already know I’m a proponent and I endorse the strategies that are taught by the Landmark Forum.

And one of their teachings is distinctions between operating in the realm of “right and wrong,” versus “what works.”

We were conditioned to see certain things as right and other things as wrong.

You know, good vs. evil, right vs. wrong, light vs. dark, Yin/Yang—it’s that dichotomy.

That’s how we understand and see the world, and therefore we have our conversations in that way.

The problem is when you accuse somebody of being wrong and think you’re right.

That immediately leads to conflict.

Because there’s absolutely NO way to have a conversation about what’s right and wrong, or what’s true and untrue, without making the other person defensive.

You’re always going to create conflict if that’s the dichotomous realm in which you operate.

It’s very difficult not to talk in this way!

It’s very difficult to avoid saying to somebody…

Because we all have beliefs as to what it is the “correct” way to build a business, raise children, practice our faith, or even play sports.

We all have an idea of what’s right and wrong.

Those of you who are sports fanatics know that in baseball, basketball, or football, every single coach has their own style.

Instead, they look at how well it works 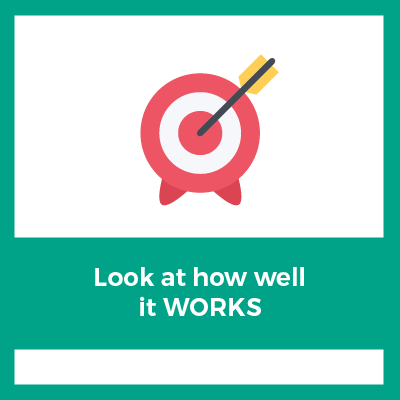 So, if you’re having a pissing contest with somebody, you need to elevate the conversation and say…

“What are we really trying to do here? What’s going to allow us to move towards our big outcome?”

This is moving away from right and wrong and focusing on what works.

Now you’re no longer making them right or wrong, you’re referencing the big vision that you’ve cast for both of you to resolve the situation and you can have a discussion as to what can get you both where you want to go.

And when you have a dialogue around proposing ideas, now a person’s guard comes down, because they’re no longer in defensive mode, and they become open to your ideas.

What you’re doing is changing the conversation so the other person is no longer trying to be right.

Their ego is not trying to win the argument

Now you’re having a conversation about where you’re headed.

So the big takeaway here is to avoid the compulsion, if you can, to be right.

Avoid your compulsion to “win” an argument.

Instead, focus on what is the ultimate big outcome that you’re trying to achieve.

Rather than trying to win an argument or trying to be right in that moment, say…

“Okay let’s take a step back, here. What is it we’re trying to move towards?”

Then align around the big vision—what you’re ultimately moving towards.

Elevate the problem, if you will, as Keith Cunningham says.

What if you’re not getting support at home for your business? 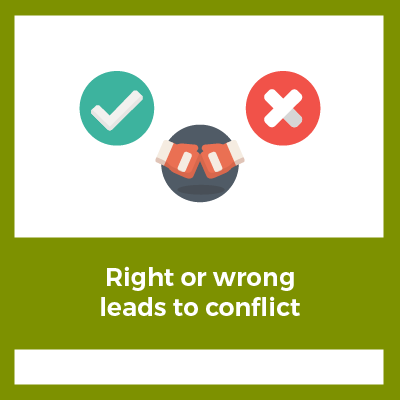 First and foremost, let go of your expectations.

Don’t try to convince them of anything.

Because when you’re trying to convince somebody that something is “right” over what they believe is “wrong,” what are you doing?

So be secure enough in what you’re doing that you’re going to stand by it, while acknowledging that you respect their position.

But avoid the conversation that paints the “right” and “wrong” scenario.

Help them see what you’re BOTH moving towards

Try to get them on board with your long-term goals.

What about if you’ve upset a family member or someone on your team?

Again, when you operate in the realm of right or wrong, you keep problems small and you fight over the little crap.

Forgiveness is a big part of fixing this problem.

“I want to know what the issue is here. If I did something incorrect, then please, I’d love to learn and become better with regards to this issue.”

It’s a very diplomatic way of being.

And again, the point is you’re trying to achieve a certain outcome, you’re not trying to be right.

It’s a very difficult thing to do, I realize.

But ultimately, you need to…

Keep the big picture in mind, forgive, and move past the small stuff

And practice focusing on the big picture.

Because when you say, “I think this might work,” and you propose your idea in that way…

A person doesn’t feel threatened, and instead they might go, “Oh okay, let’s see how that might work.”

They switch their mind to analyzing what you’re proposing from a “what works” standpoint, rather than hanging onto their ego.

Now they still might not agree with what you’re doing, but at least they’re probably going to be more open to hearing you out.

The skill of elevating the conversation can go a long way in avoiding conflict with your family, your upline, and help you develop a strong team.

I hope this helps you!

Click here to get access to my 10-day online recruiting bootcamp, which will walk you through my relationship building process, start to finish, and also show you the exact systems I use to generate 300-500 leads and 30-50 customers per day.

So if you’re ready to get started…

And if you found this content helpful, I would love to read your comments below! 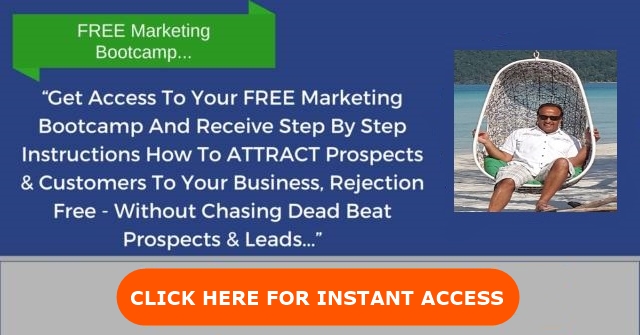 Featured Services To Boost Your Business 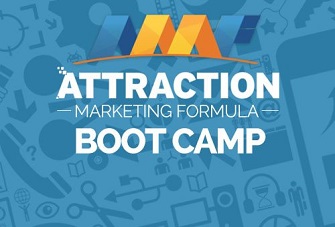 Are You A Network
Marketer? 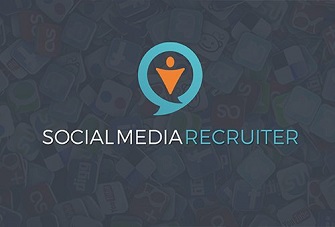 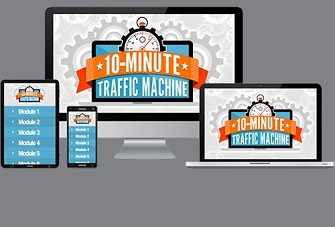 Do You Want More
Traffic & Leads?

Discover the Simple Method We Used to Produce a 1348% ROI on Our Advertising.
Click Here To Learn More!