How To Make Viral Video For Ultimate Business Branding

In this blog post you will learn how to make viral videos for ultimate branding for your business YouTube channel. 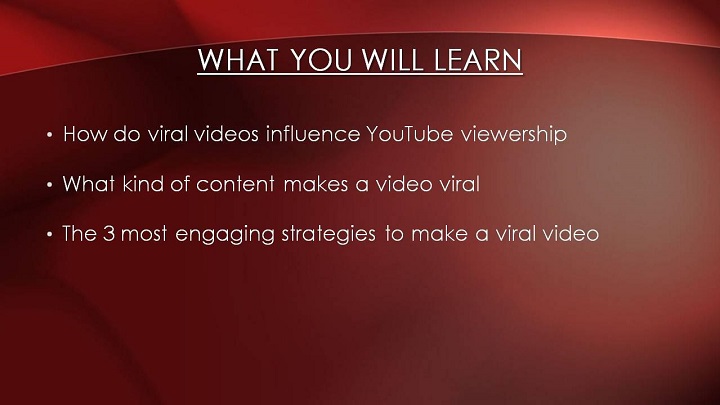 Before we start, let’s take a look at the breakdown of what you will be learning. In this video course, I will explain how YouTube’s viewership is influenced by viral videos. You will learn what kind of video content will make your video go viral. I will also be providing you a couple of great strategies you can use to create your very own viral video to achieve massive branding for your business. 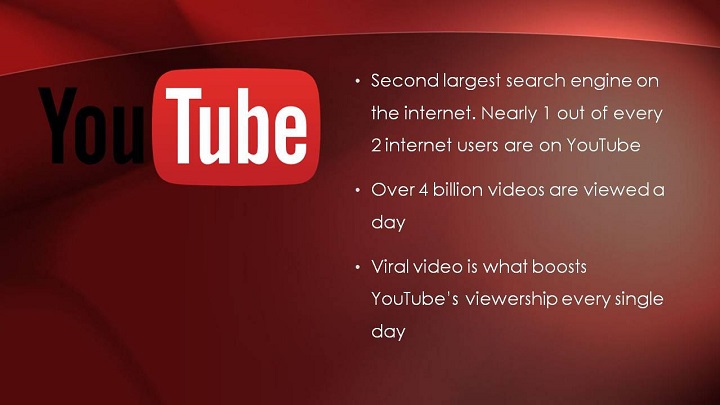 YouTube is the second largest search engine on the internet. Nearly 1 out of every 2 internet users are on YouTube.

According to YouTube statistics, 6 billion hours of video are viewed every month and recorded a 50% increase in just one year. This shows that YouTube’s viewership covers a really huge scale on the internet.

And how does that happen? Through viral video viewing on YouTube of course.

60 hours of video are uploaded every minute, or one hour of video is uploaded to YouTube every second.

Over 4 billion videos are viewed a day.

Viral video is what boosts YouTube’s viewership every single day. 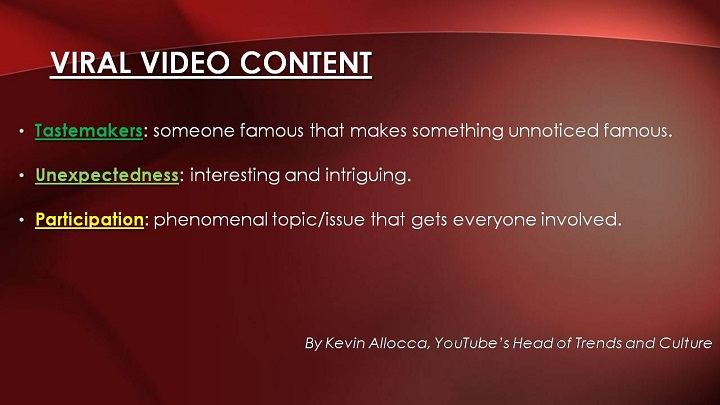 So how do you determine if a video is viral? Why do some videos become wildly popular while others do not?

Kevin Allocca, YouTube’s Head of Trends and Culture, gave a talk on TEDYouth Talk on how does a video go viral on YouTube.

In this talk, he highlighted three things that make a YouTube video go viral.

What is a tastemaker? A tastemaker is someone famous that makes something unnoticed become famous. Take this as an example. Rebecca Black’s Friday became one of the most popular videos because Michael J.Nelson from Mystery Science Theater posted a joke about this video on his twitter and a lot of people started talking about it everywhere on the internet. This is a sort of snowball effect whereby a famous person shared a point of view and followers continue to share it with an even larger and extended bunch of audience, therefore greatly accelerating the process of a video becoming viral on YouTube.

Next, Allocca mentioned about the common content of viral videos is the unexpectedness factor.

Viewers tend to be more attracted to unexpected content within a video as they find it interesting and intriguing. Viral videos like Rebecca Black’s Friday, the Nyan cat with repetitive melody and motion, or even the Gangnam Style by Korean popstar PSY, what scripts could you have written that would have contained anything related to these videos in it?

YouTube is a platform where one hour of video is uploaded very second. And viral videos have one thing in common, which is its video content has to be unique and unexpected in order to stand out among other videos on YouTube.

Then Allocca pointed out the most powerful factor of all, which is the participation from people all over the internet. What he meant by participation is the phenomenon where a certain topic or issue that just somehow is able to get everyone involved.

Taking Rebecca Black’s Friday as an example again, there is a crazy amount of more than 10,000 parodies of Friday on YouTube now. It has created a phenomenon where people all over the internet participated in the issue – which in this case is typically humor and joke. This is how community participation makes a video viral because of the widespread involvement that gets more and more people to notice the existence of the original video, and therefore giving it more views and traffic.

So according to Kevin Allocca, tastemakers, creative participating communities, complete unexpectedness, these are characteristics of a new kind of media and a new kind of culture where anyone has access and the audience defines the popularity and would drive a video viral on YouTube. 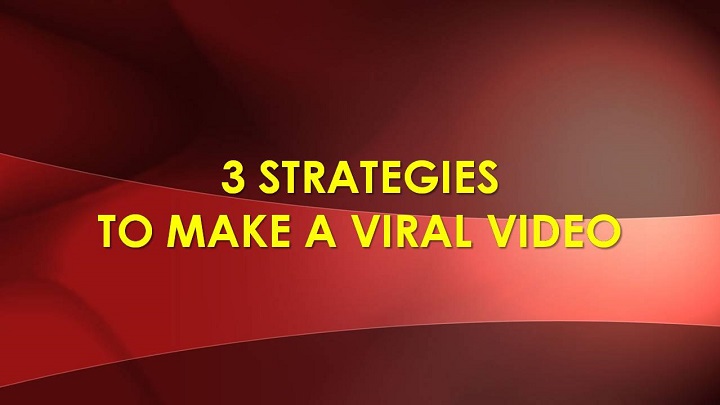 Now I will also be giving you 3 great strategies you can use to create your very own viral video to achieve branding, leads and sales for your business. 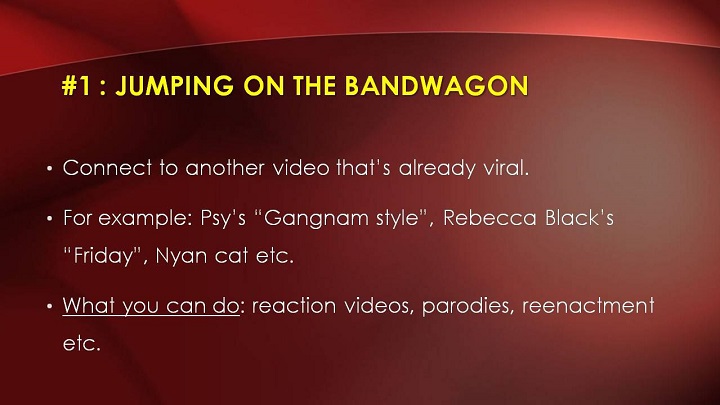 First strategy is to jump on the bandwagon!

This means connecting your video to another video that is already viral on YouTube. Have you ever noticed how, after you’ve seen one video go viral, you’ll see dozens of mash-ups, remixes and parodies jumping on the band wagon?

It is a norm where people tend to like watching videos that reference things they remember seeing before. It is the sense of participation and involvement that attract them to watch the video. How so? Because it simply gives them the feeling that they are “in on the joke,” that makes them more likely to look kindly on your video and pass it along to their friends.

More than 2000 parodies of Gangnam Style videos were uploaded to YouTube at one point in just two weeks at the original video’s highest peak of popularity. Some other example of viral videos are the Rebecca Black’s Friday and Nyan Cat.

So what you can do is when you’re going to make a viral video, think about the contents of other recent viral videos and how you can take advantage of their popularity. For example, you can do reaction video, parodies, reenactment, etc. 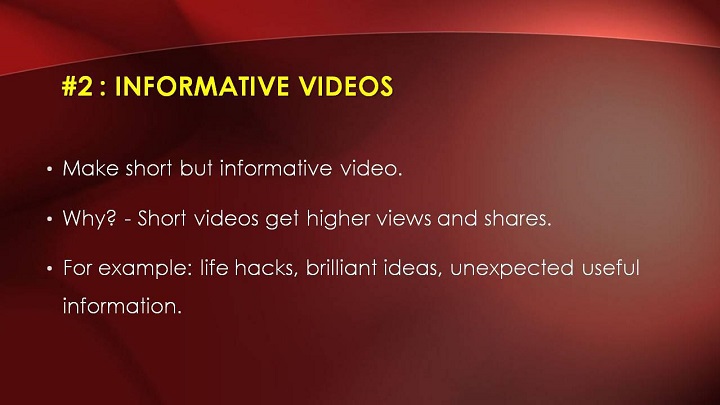 The second strategy is to make informative videos.

Viewership on YouTube in the near few years have shown that videos of shorter length generally get more views than longer length videos. This is because human’s attention span on a video is said to be shorter than a goldfish’s attention span.

The New York Times cites a study on “viewer abandonment,” in which nearly a fifth of viewers clicked out of a video in the first ten seconds. This became more pronounced with videos that were slow to reach the punchline, causing the rate of viewers to click out to double.

So making your videos short is a crucial optimization method. Keep your content short, focus on images and craft headlines that say it all. Rich media, like GIFs that play on a continuous loop, can capture attention effectively without the viewer deeming it takes up too much time. So try to include more details in small length videos. Small length is always good for getting much views and conversions.

Some examples of short informative videos that are usually viral are videos of life hacks, brilliant ideas, and unexpected useful information. 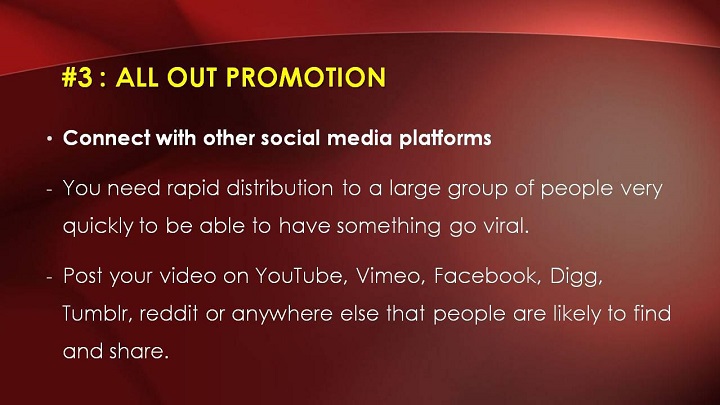 And the third strategy is to go all out on promoting your video.

The fastest and most direct way do this is to connect with other social media platforms. Reason being you need rapid distribution to a large group of people very quickly to be able to have something go viral. So you have to make it as easy as possible for people to share your video. You should post your video on YouTube, Vimeo, Facebook, Digg, Tumblr, reddit or anywhere else that people are likely to find and share.

The idea is here to spread and promote your video to anyone and anywhere possible. 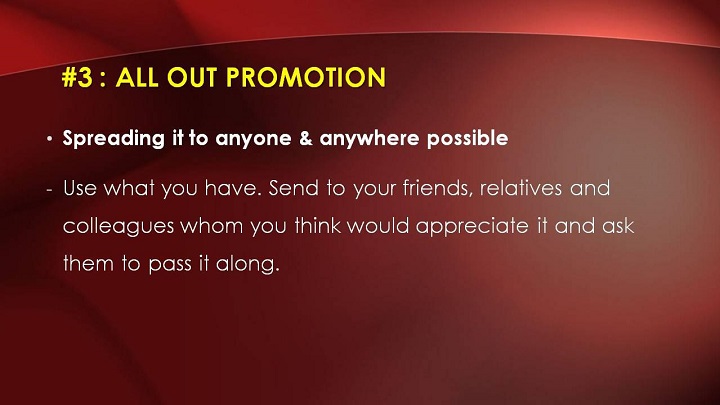 Most popular viral videos didn’t become viral by accident. There are companies who spend huge money to create a viral video that are also spending thousands of dollars “secretly” promoting it. They would use multiple YouTube accounts, forum sock puppets and other clandestine methods.

Since assuming that you may not have the same resources, what you can do is use what you have. Send to your friends, relatives and colleagues whom you think would appreciate it and ask them to pass it along. It is by word of mouth and the snowball phenomenon that a video will get viral.

So we’ve came to the end of this video course on how to make viral video for ultimate business branding through YouTube. Head onto the next video to learn more!